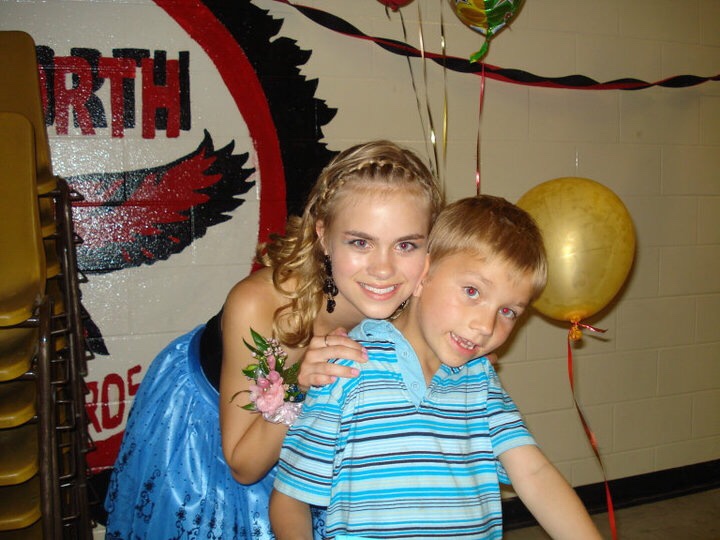 When I tell people the age difference between my brother and I, I always get the same look … bewilderment.

A lot of people have trouble comprehending the notion that siblings can be nearly 7 years a part. They always ask me if my brother and I get along.. as if the age difference determines THAT.

Truth be told… we have always gotten along.

Sure, we had the typical brother and sister fights, but we have never gone a day without talking out of anger, or even really an hour.

My brother and I never had to compete growing up, which was an amazing environment to be raised in. Because of our age and gender difference there was really nothing for us to compete at. We liked different things, we played different sports and we had very different friends.

Myles was born in a the middle of January on probably one of THE coldest days. I remember going to see him at the hospital after he was born. Even then he was too big for me to hold onto. I swear my brother came out of the womb bigger than me.

He was not a very good baby. He needed my mom’s attention constantly, but I didn’t care. That meant I got to go on adventures with my dad. We went out for breakfast, we went to church together, we ran errands together and even went to the mall together. Myles made my dad and I’s strong relationship even stronger.

One thing I did, however, resent him for was stopping our family from going out to dinner. Before Myles was born my parents and I would go out to dinner every night. But like I said.. Myles was a fussy baby and would often scream at the top of his lungs in restaurants, so our nightly dinners out ended pretty quick once he was born.

Even with our age difference, Myles and I were forced to play together. I remember getting stuck in his bedroom with a baby gate, being forced to play with him. We would play with Hot Wheels, and Thomas the Tank Engine, and sometimes (if I was lucky) I was allowed to take him out of his room and we could play house. He was often my husband and my Build-A-Bears were our children. That was probably my favourite game.

We were also forced to watch television together. Which often meant hours upon hours of Thomas the Tank Engine… to this day I can still sing all the songs. I used to pretend to hate it .. but deep down I liked watching those shows with my brother.

I have always been his greatest protector.

I walked him to his classroom on his first day of kindergarten. I cleaned up his face when he came out for recess with chocolate pudding all over him. I played with him at recess to make sure he was okay.

He was always okay. Myles has a way of getting everyone around him to like him. All of my dance friends loved him. He would befriend his entire class. He never lacked someone to play with at recess. He is probably the most lovable person I have ever met.

Myles and I are close. It’s a different kind of closeness because of our age difference, but nonetheless we are close.

Our relationship has had to go through a lot of changes over the years. Because of our age difference… I went away to university before he was even out of elementary school. I think this was very hard for him. I know it was hard for me. It was at a huge point in my life, really a life-changing point, and he hadn’t even had his first kiss yet.

Then he started getting his episodes.

When my brother was in grade 8 he ran right out of the building in the middle of the school day. When asked why he did it he couldn’t even remember doing it.

My parents sent him in for tests and the doctor informed them that he was having mini seizures in his brain, causing him to not remember things and making him act irrationally.

That was hard for me to hear. I was over an hour away and in my second year of university, I couldn’t do anything and yet I felt like it was my fault. To this day I still ask myself sometimes if I had just stayed home would he have had such a bad couple of years. I know that’s silly. I know that when I left it just happened to be the time that most people see signs of mental illness.. but it is still really hard to think about him suffering without me there.

That was probably the only time our age difference affected our relationship.

It’s not so bad now because Kirk and I live only 15 minutes away from my family, but when we lived in Mississauga it was really hard. Not only were Myles and I in completely different life-stages, but we were so far away from one another. We couldn’t really relate, and seeing each other at family parties wasn’t really enough to catch up.

I am so excited to see my brother grow up. He has surpassed so many hardships in his life and he is only 16. He is wise beyond his years and most certainly gifted. I am so grateful that I get to be his sister.

Typically in my blog posts I like to have some life lesson, something that you can implement after reading each post. But this post isn’t like that. This just about the person I love most in my life.